I once did a hard-hitting news story for my high school paper about the beloved meat chili in the school cafeteria. (In retrospect I’m not sure how many people loved it aside from my best friend and me, but that’s beside the point.) During our interview, the woman who made the chili shared her secret: “I make a batch on Monday and then let it sit around for about a week before serving it.”

Having eaten that chili probably a hundred times, I wished I’d never asked.  But years later, and many batches of homemade chili later, I understand what she meant. Chili is good the day it’s made, but it’s really good if it sits for a day or two and the flavors have time to develop. 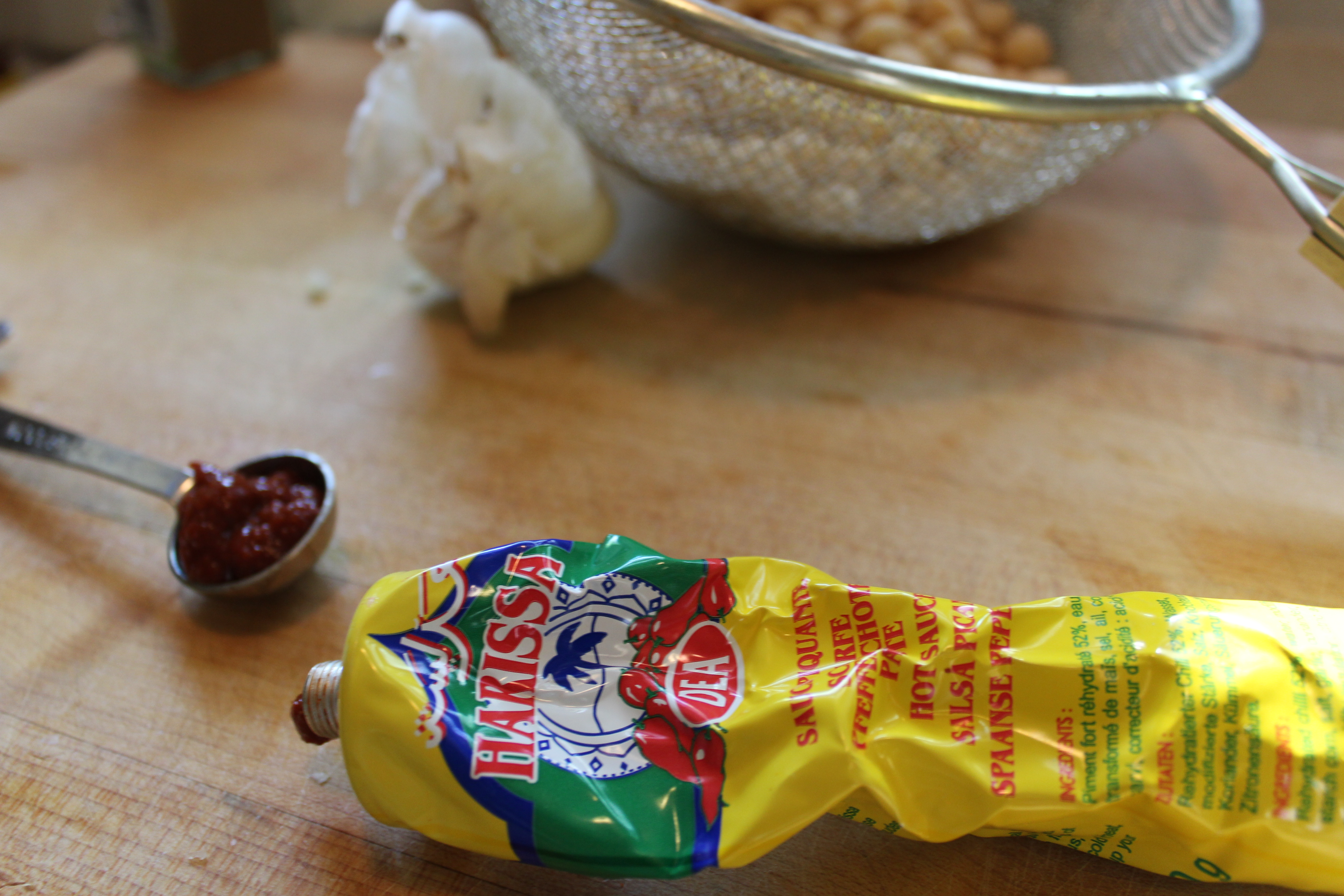 While I have fond memories of that cafeteria chili, I wanted to come up a version that was more… 2015. This recipe has all the essential chili elements—it’s hearty, full of vegetables, and spicy—but with Moroccan-inspired ingredients and spices, it’s also a updated twist on the classic.

Most turkey or chicken chili recipes call for ground meat, which is extremely lean, but because it has very little fat, it often ends up having very little flavor. Instead, I used shredded breast meat from a store-bought rotisserie chicken, which is still lean but so much more flavorful and tender than ground meat. And because the chicken is shredded, as opposed to cubed, it really absorbs the spices. A win win. 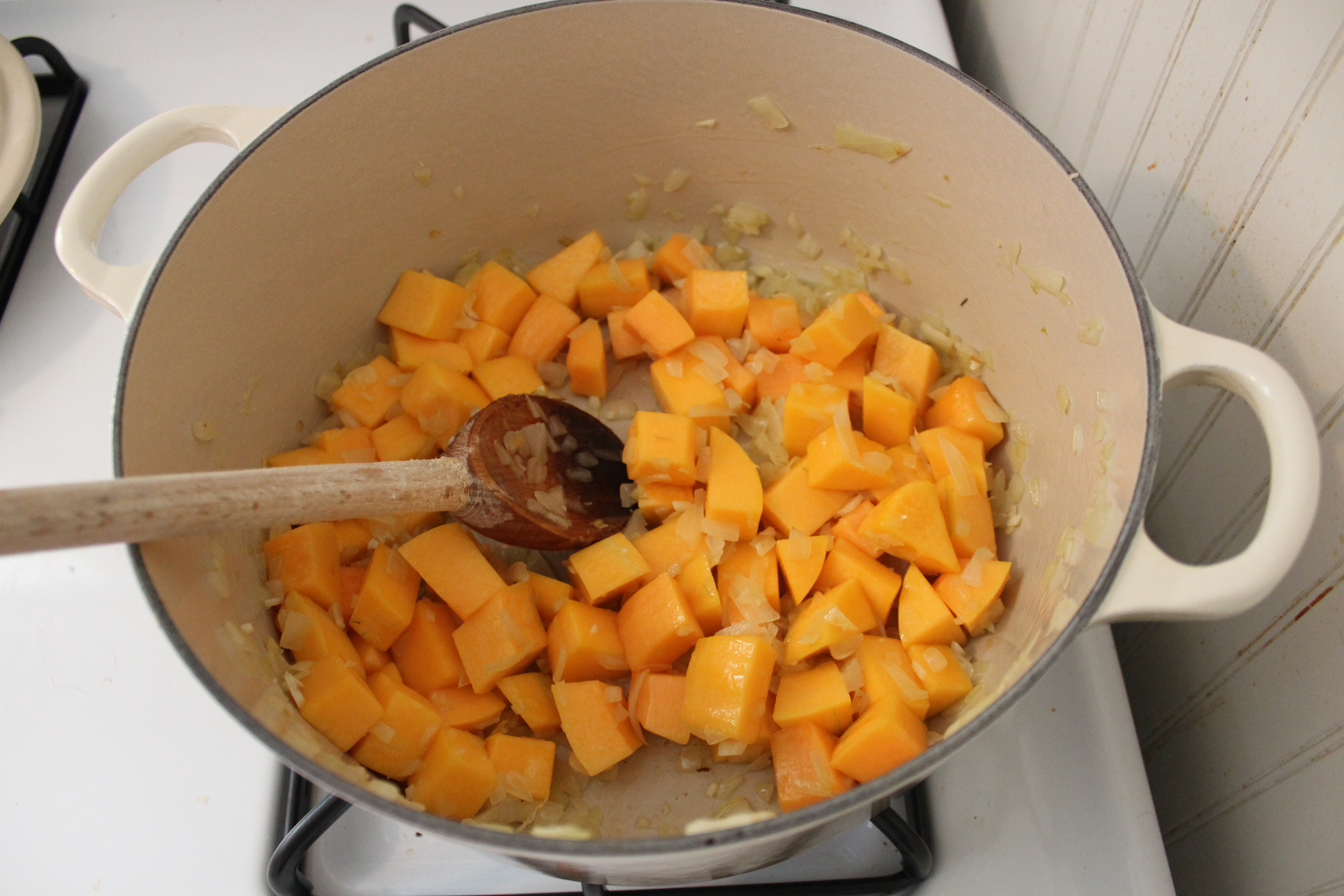 Butternut squash thickens the chili and adds a barely discernible sweetness—just enough to balance out the spice. And in keeping with the Moroccan theme, I used chickpeas instead of beans. I find they hold their shape better than cooked beans, especially if you’re planning on reheating the chili over several days, cafeteria style. 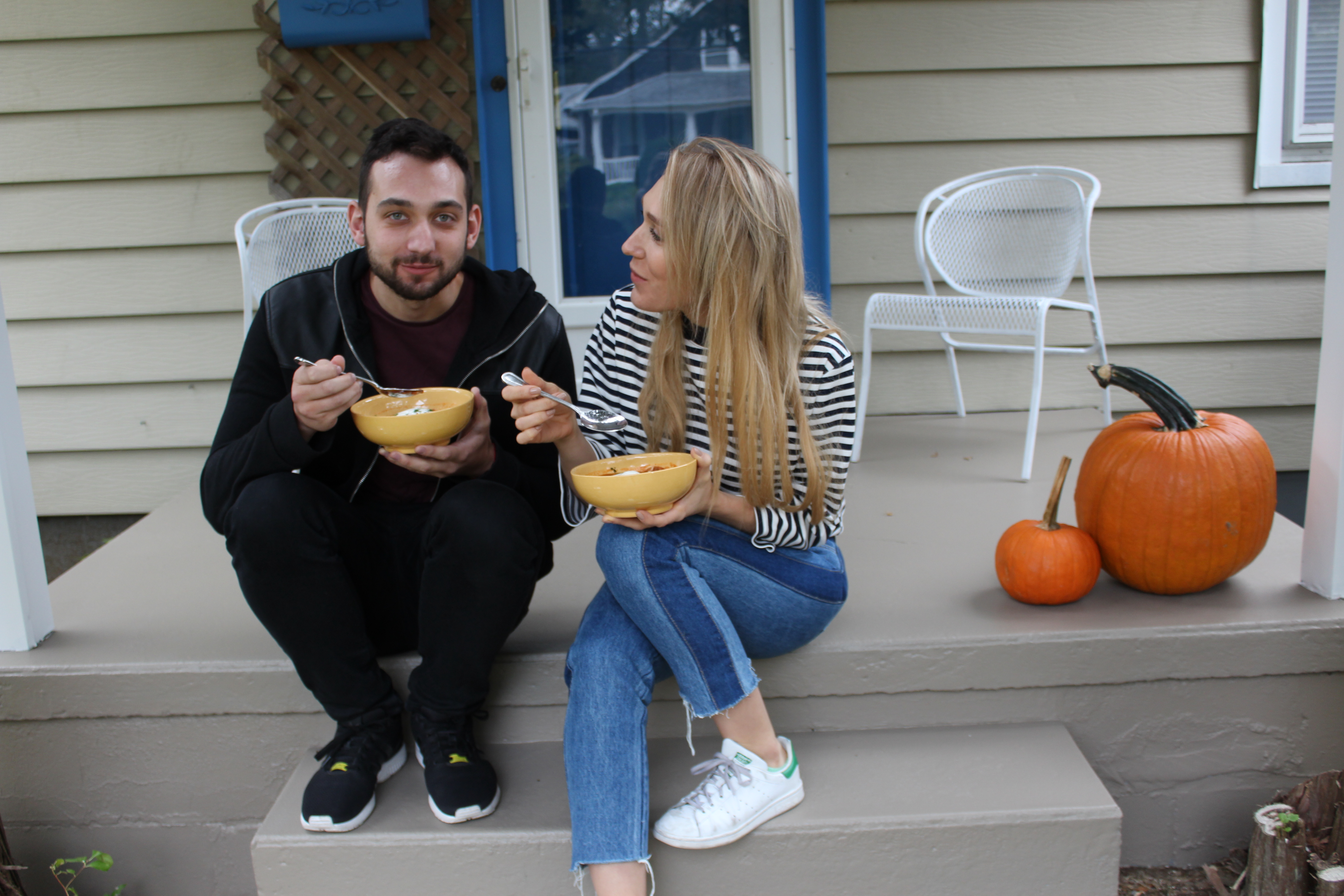 The heat here comes from harissa, a spicy red pepper paste that’s a mainstay of many Moroccan and North African recipes.  Think of it as Sriracha’s much cooler and more potent sister. (If you’re the kind of person who likes to douse your eggs with Sriracha, try mixing in a little harissa next time for a distinctly different kick.) I call for a moderate amount of harissa for this chili, but feel free to add or subtract a ½ tsp. or so depending on your heat preference. And don’t forget to finish off the bowl with a dollop of yogurt and a sprinkle of parsley to cool things down. 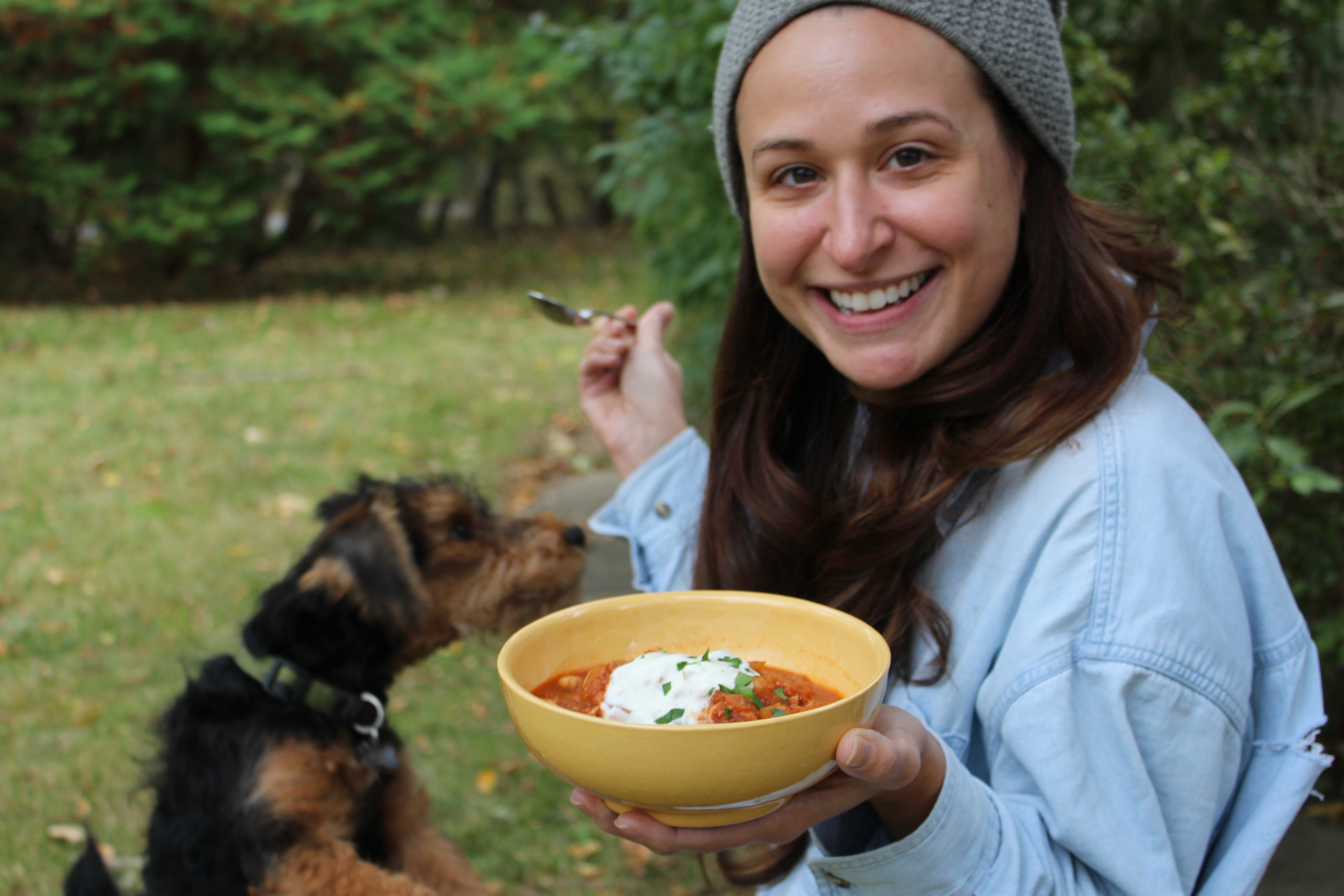 Finally, despite the secret behind that cafeteria chili of yesteryear, I don’t think I’d make this recipe an entire week in advance. One or two days will do the trick, but by all means, if you’d rather eat the chili the minute it’s done, go for it. 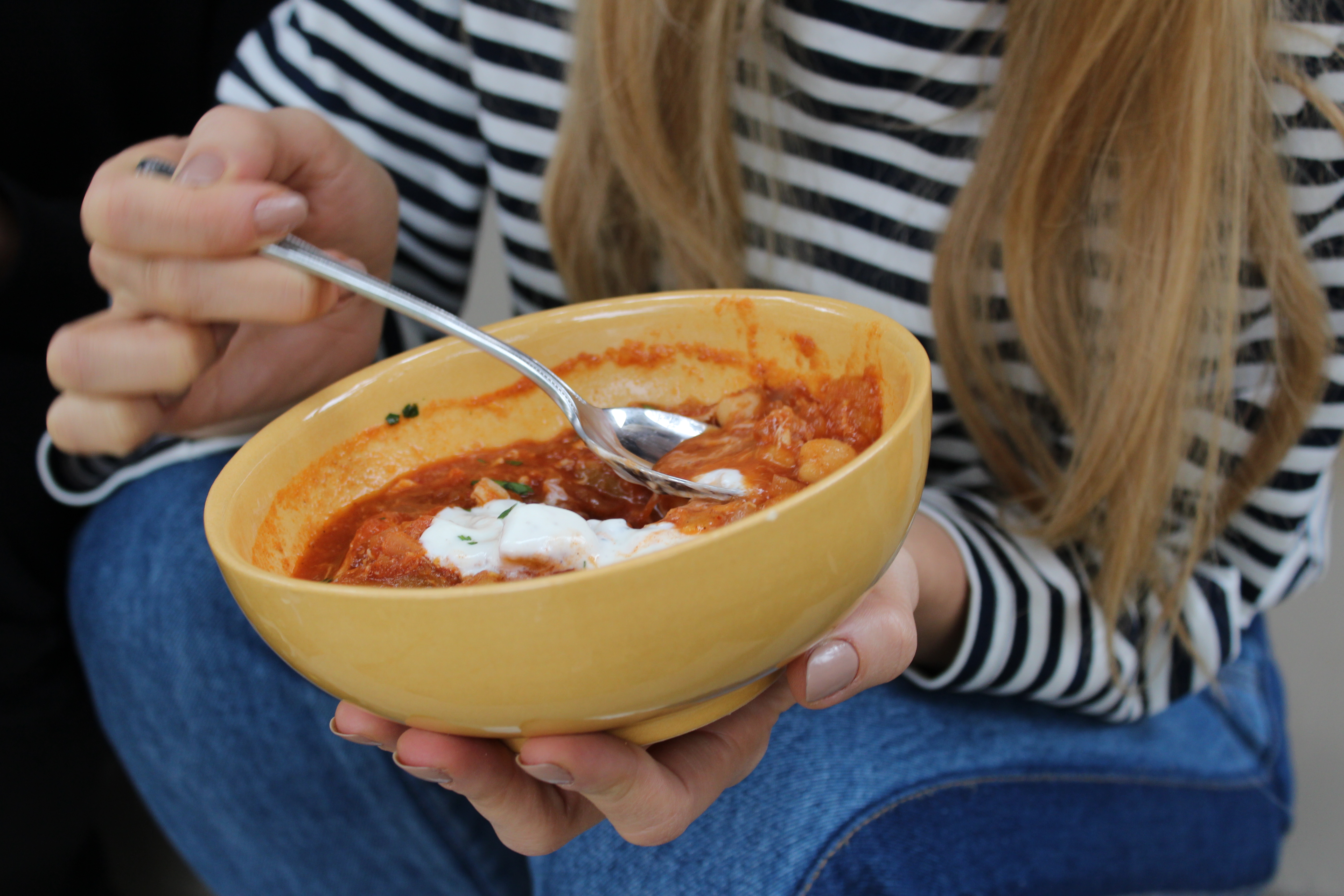