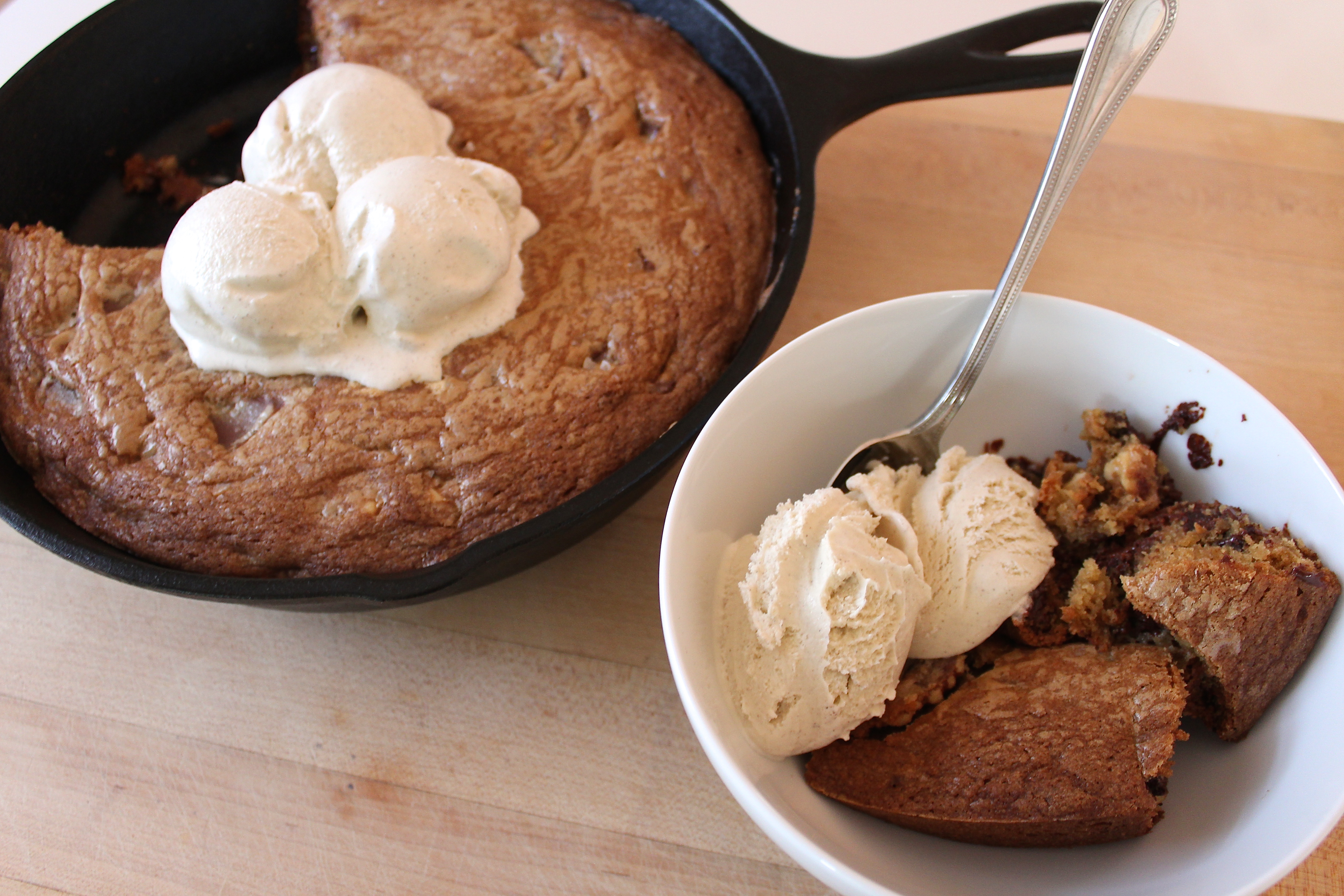 Experimenting with new recipes for chocolate chip cookies feels a little like reinventing the wheel—the formula is tried and true, beloved, and many would argue it needs no tampering. But I’ve learned from Ina that taking a familiar recipe and making it on an entirely different scale can turn a dish that’s expected into one that’s a refreshing twist on the original. With that idea in mind, I made a rich chocolate chunk cookie dough and baked it into one giant cookie-for-a-crowd. Add a few heaping scoops of vanilla ice cream, and the humble cookie is transformed into a delicious, totally over-the-top dessert. 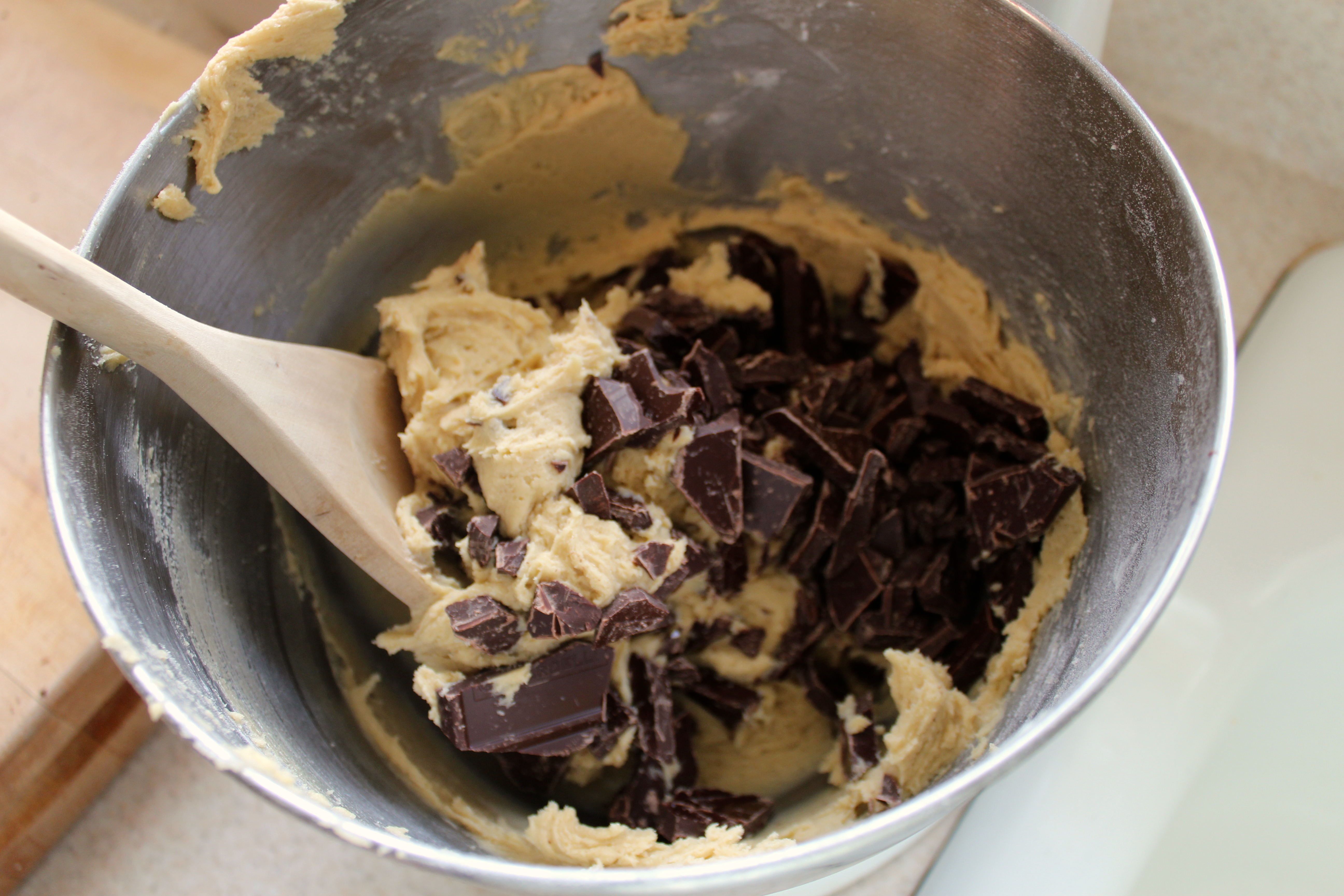 Because the batter is baked in a cast iron skillet instead of scooped into individual cookies, the perimeter of the cookie comes out crispy and golden brown while the center remains soft and ever-so-slightly under-baked.

The other secret to this recipe is sugar’s best friend: salt. I sprinkle coarse sea salt onto the bottom of the pan before spooning in the cookie batter, and then sprinkle another big pinch over the top before baking. This ensures that every bite has a perfect little marriage of sweet and salty. Finally, I chop up semi-sweet chocolate bars into big chunks instead of using pre-packaged chips. You might as well pull out all the stops if you’re making a cookie the size of a Frisbee. 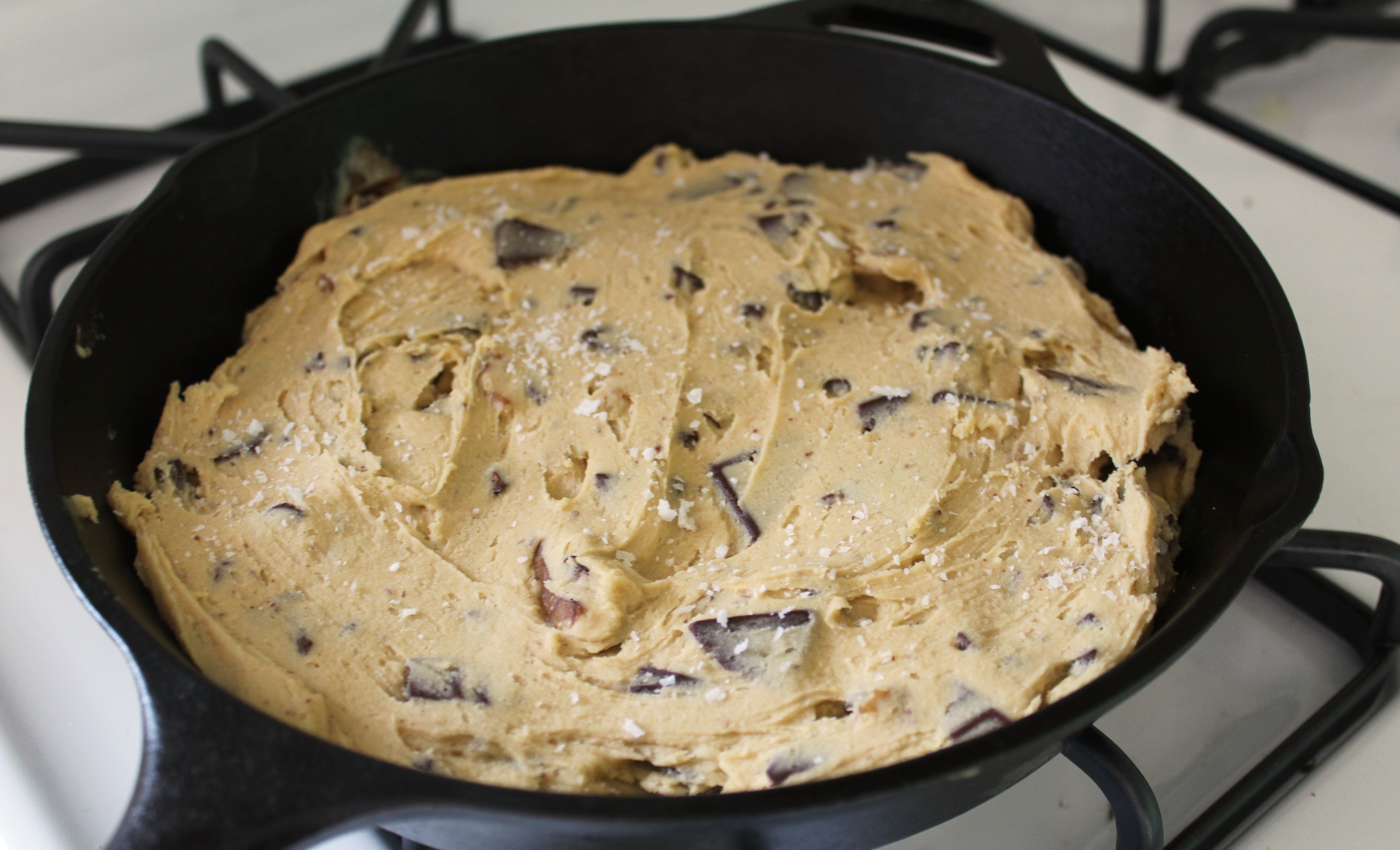 My favorite way to serve this recipe is to put the pan directly on the table (on a hot pad!), scoop lots of ice cream on top, and let everyone dig in. The more elegant option would probably be to serve scoops or slices of the cookie in individual bowls, but where’s the fun in that? 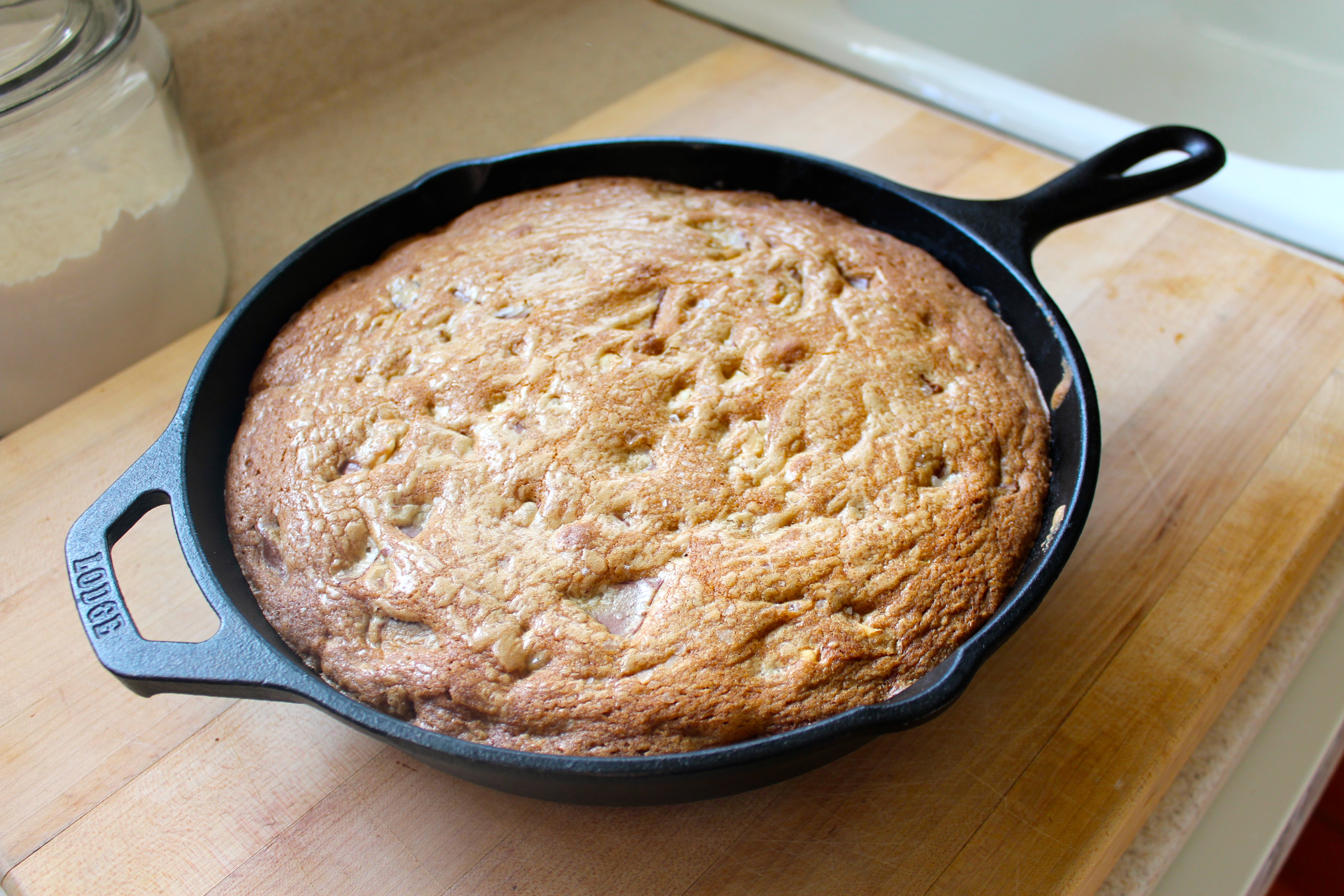 I made this cookie for a Super Bowl party at a friend’s house a few years ago, and it has been a tradition ever since. Depending on the number of spoons in the game, there can be some teamwork involved in finishing the entire cookie, but I’ve never seen a group too small to get the job done eventually. 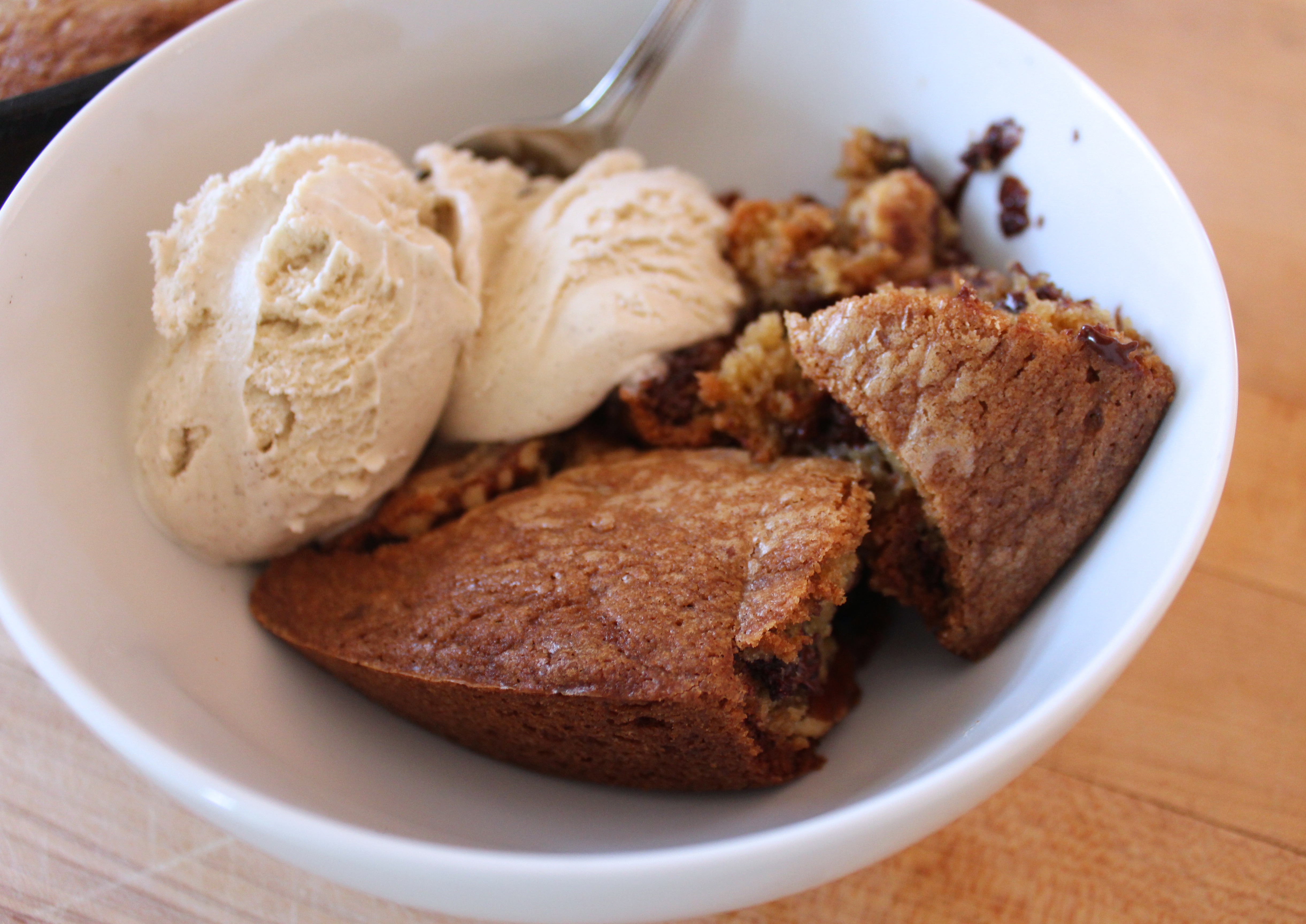 Note: If serving directly from the oven, use a dish towel or oven mitt to cover the handle of the skillet- it’s very easy to forget it’s hot and burn yourself!