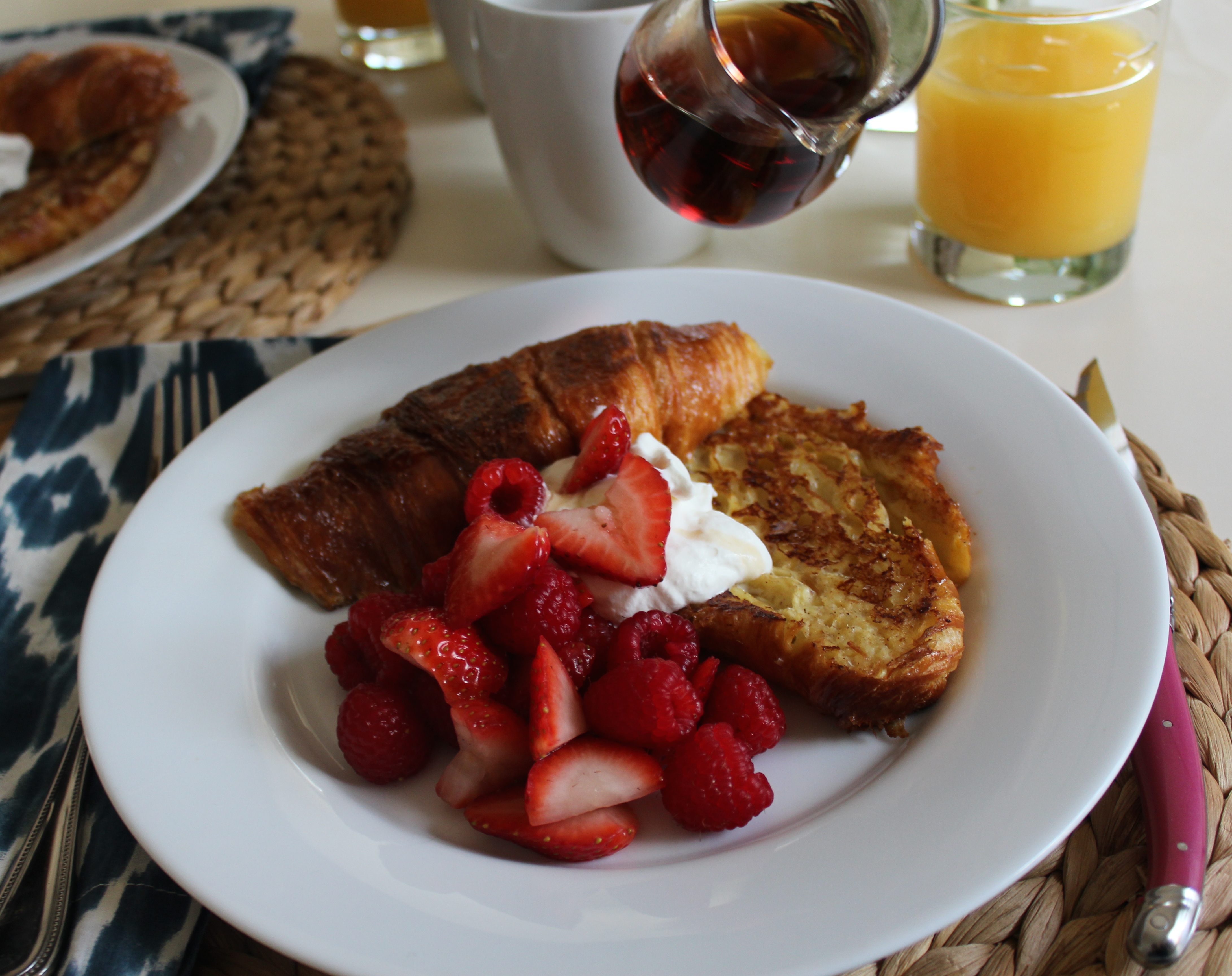 The idea of getting up early to cook breakfast for someone has always struck me as an incredibly thoughtful gesture. But in the middle of winter, it’s not always to leap out of bed first thing in the morning, so I wanted to come up with a recipe that was special enough for Valentine’s Day breakfast- but not so complicated that you’d sooner roll over and go back to sleep than actually make it.

Croissant French Toast is definitely a little more festive and decadent than traditional French toast, but because this recipe calls for using day-old bakery croissants, it’s no more difficult or time consuming to make. In fact, because croissants are lighter (so to speak) and flakier than brioche or challah bread, they absorb the milk and egg mixture much more quickly. Assuming you are fully awake when you begin, this entire recipe should take less than a half hour from start to finish. 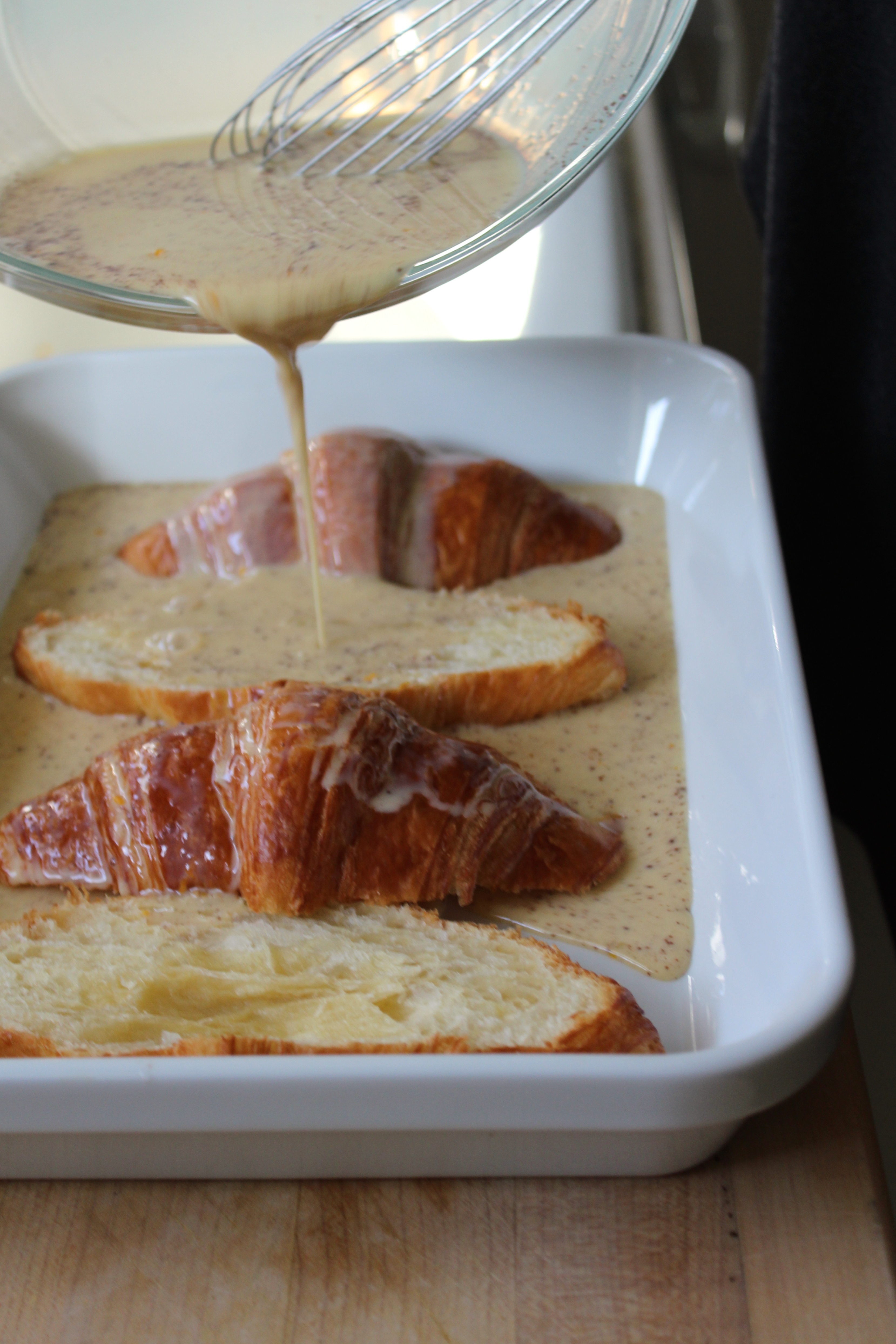 The French toast custard is flavored with cinnamon, nutmeg, vanilla extract and orange zest. Ina often uses a splash of liqueur to deepen the flavor of her baked goods and desserts, and she suggested adding a splash of Grand Marnier to really bring out the orange flavor. You’ll be amazed at what a difference it makes. I find that another splash mixed in with the berries gives them a nice little zing, too, and makes the out-of-season fruit much juicier. 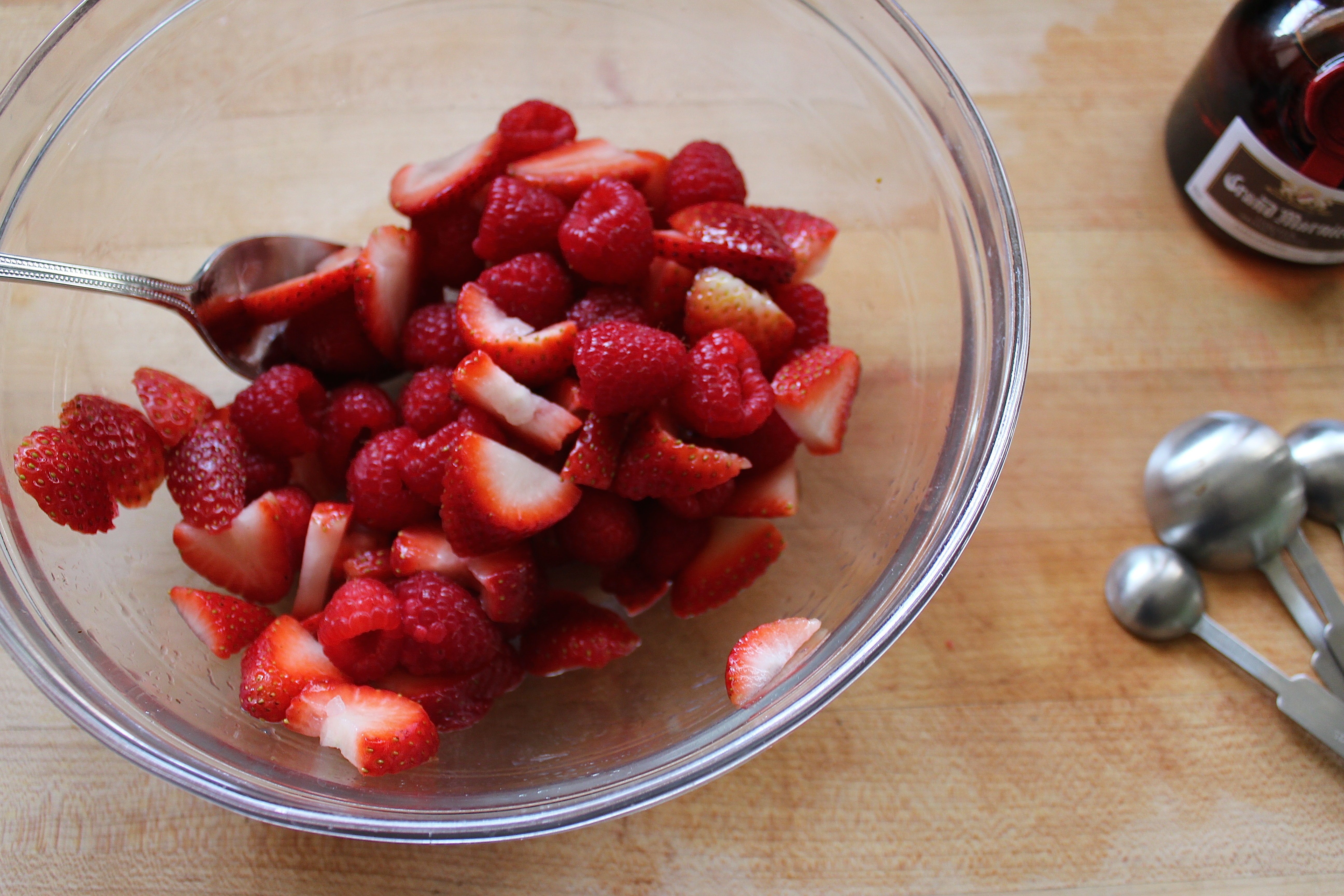 The croissants cook through pretty quickly over medium-low heat, but if you’re worried about the first one getting cold, just turn your oven on the lowest temperature and keep the croissant halves warm until you’re ready to serve them.

When I first thought about this recipe, I imagined a breakfast-in-bed scenario, complete with a picture-perfect tray, big mugs of coffee, and sunlight streaming through the window. But in reality, February mornings are freezing and dark, and frankly, eating in bed is a little awkward.(Maybe it’s telling that the only times I can remember actually eating breakfast in my bed involve Jell-O and a bad case of the flu.) 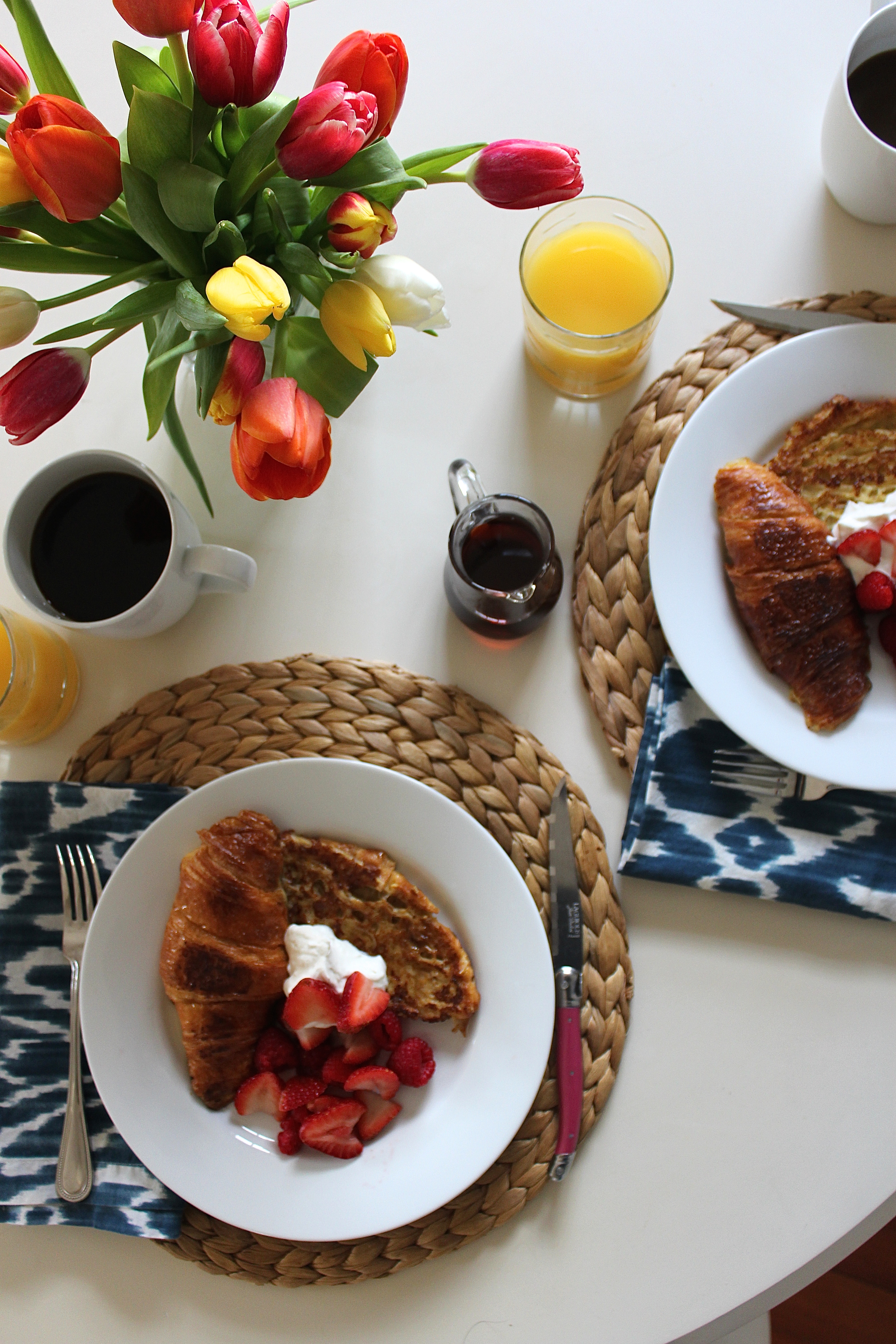 I tested this recipe on my friends Lulu and Julia and fortunately, they agreed it tasted just as good at the kitchen table as it would have in bed. That said, if you want to go the breakfast-in-bed route, don’t let me deter you. Just don’t forget the whipped cream! 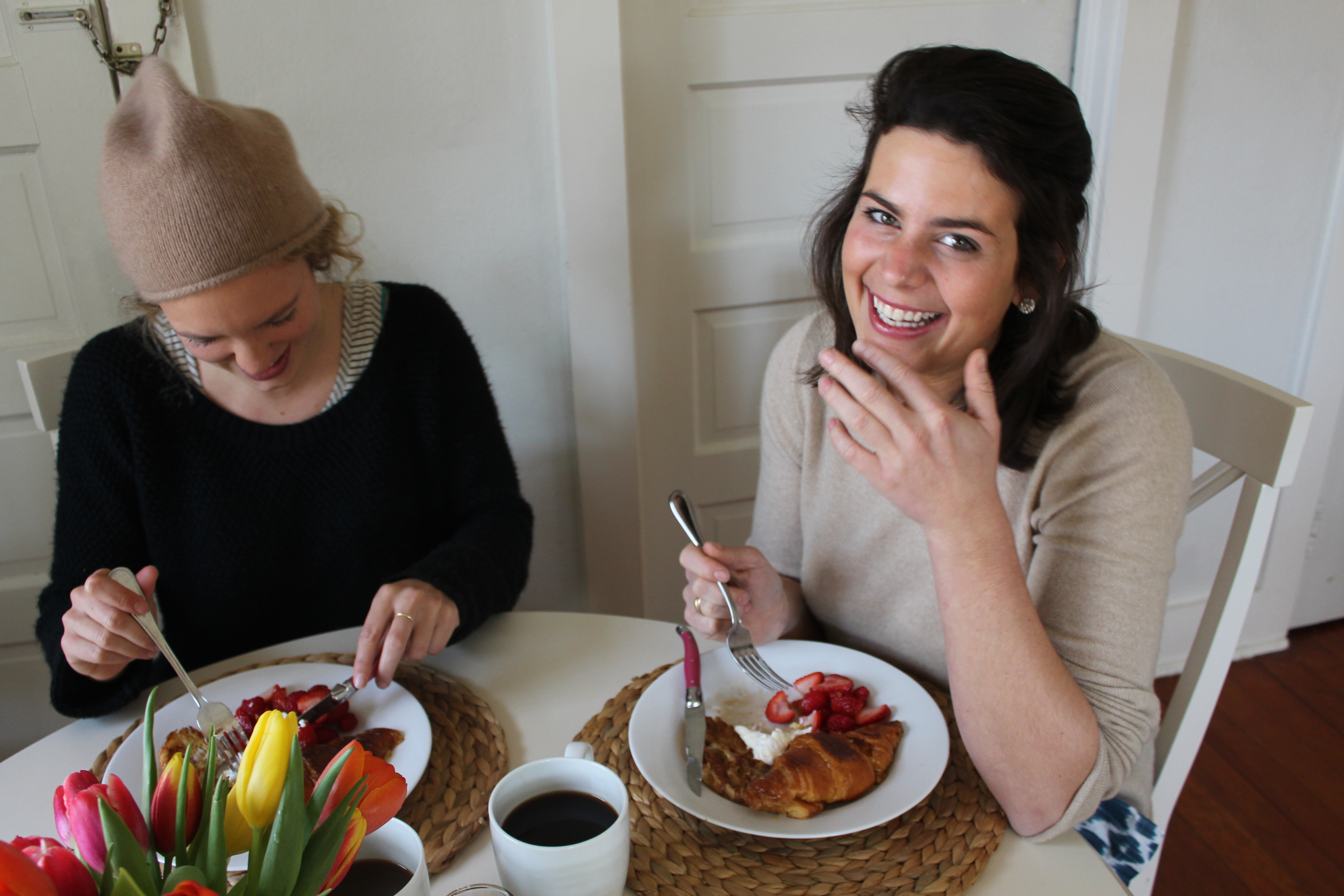 Meanwhile, in a medium bowl, toss the raspberries and strawberries with the remaining 2 teaspoons Grand Marnier.