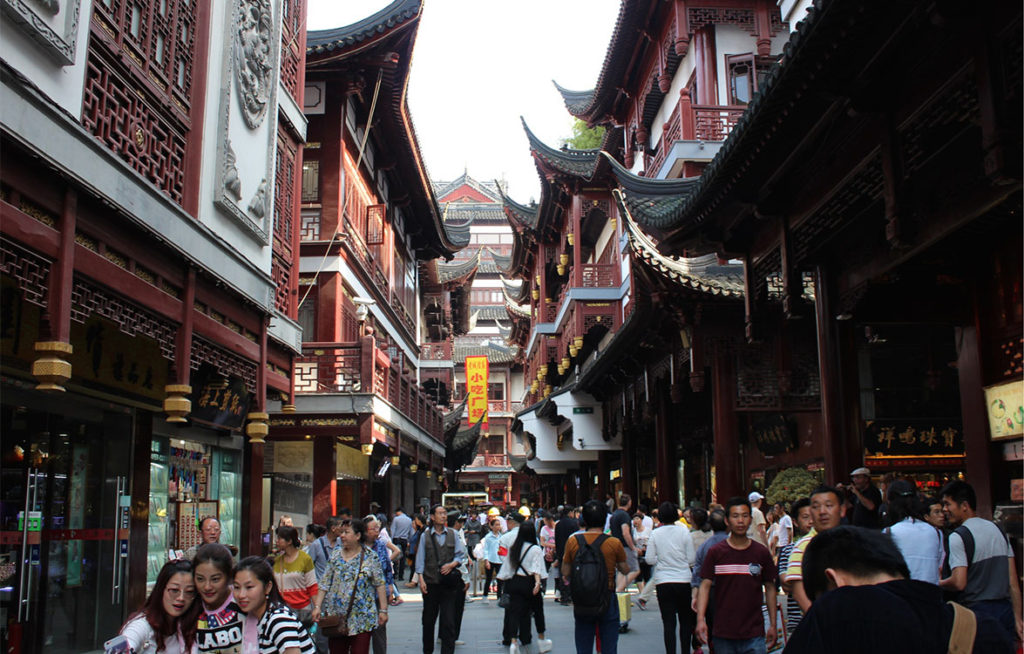 My brother Sam has lived in Shanghai for the last few years, and at long last my mom, my younger brother, Henry, and I planned a trip to visit to him. We did our best to tackle (or least get some sense of) Beijing, Hong Kong and Shanghai in just ten days, a tour Sam referred to as “China Light.” Though we only had time for relatively quick stops in each city, one thing we spent plenty of time doing in all of them was eating. And there was nothing light about the food.

It probably goes without saying that 10 days is barely enough to scrape the surface of China’s wide-ranging cuisine. But even during our brief stay, we had lots of memorable meals that ranged from bites on the street to multi-course feasts, and I’ve shared a few of my favorites here. We also had what we thought were little fried doughnuts but were actually curried fish balls, and those I have refrained from sharing. 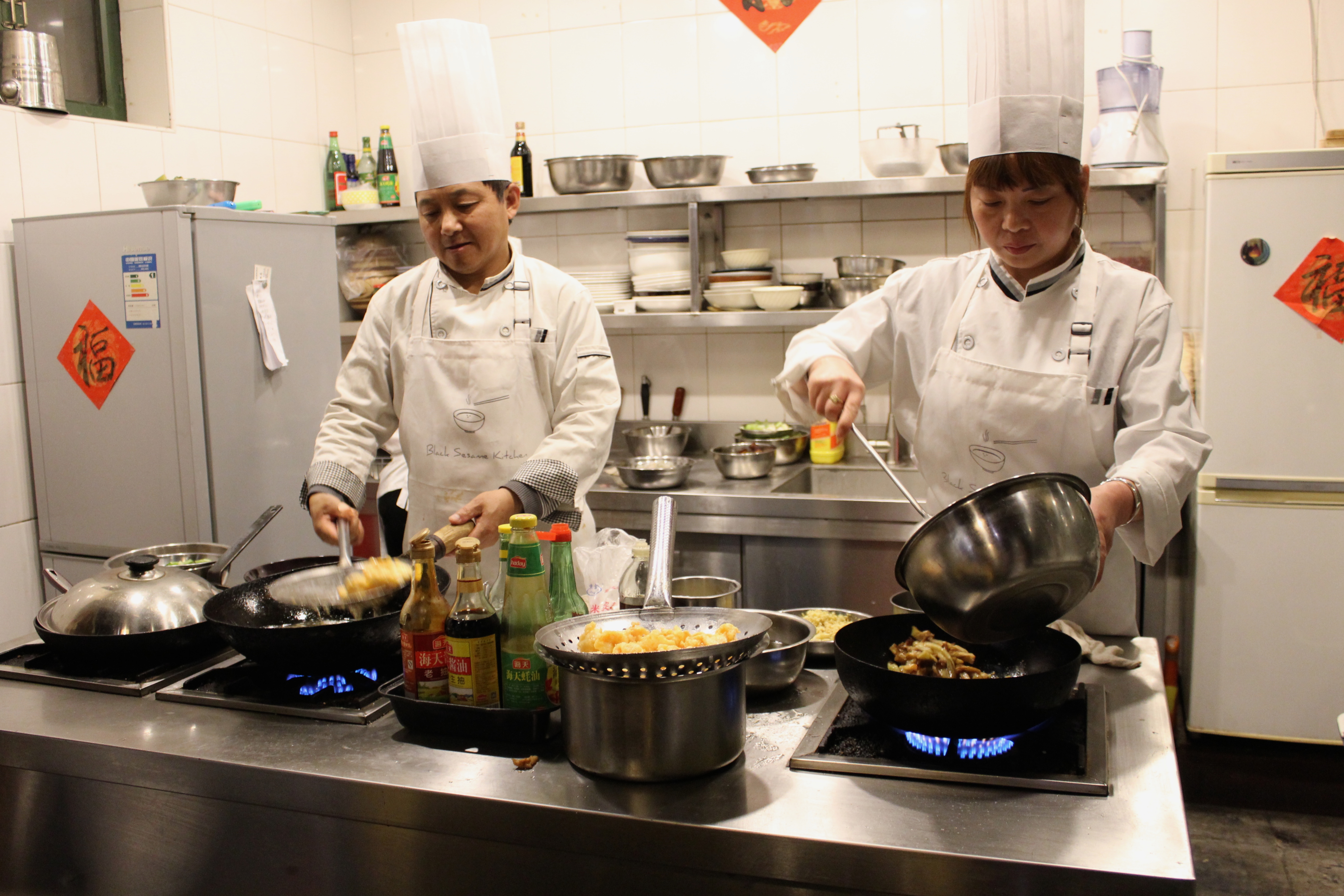 Chefs in action at Black Sesame Kitchen in Beijing. The restaurant is tiny- two little open kitchens each with their own communal dining table- and dishes are served as they are cooked. The 10 course menu included traditional specialties from different regions of China and a few seasonal dishes, too. 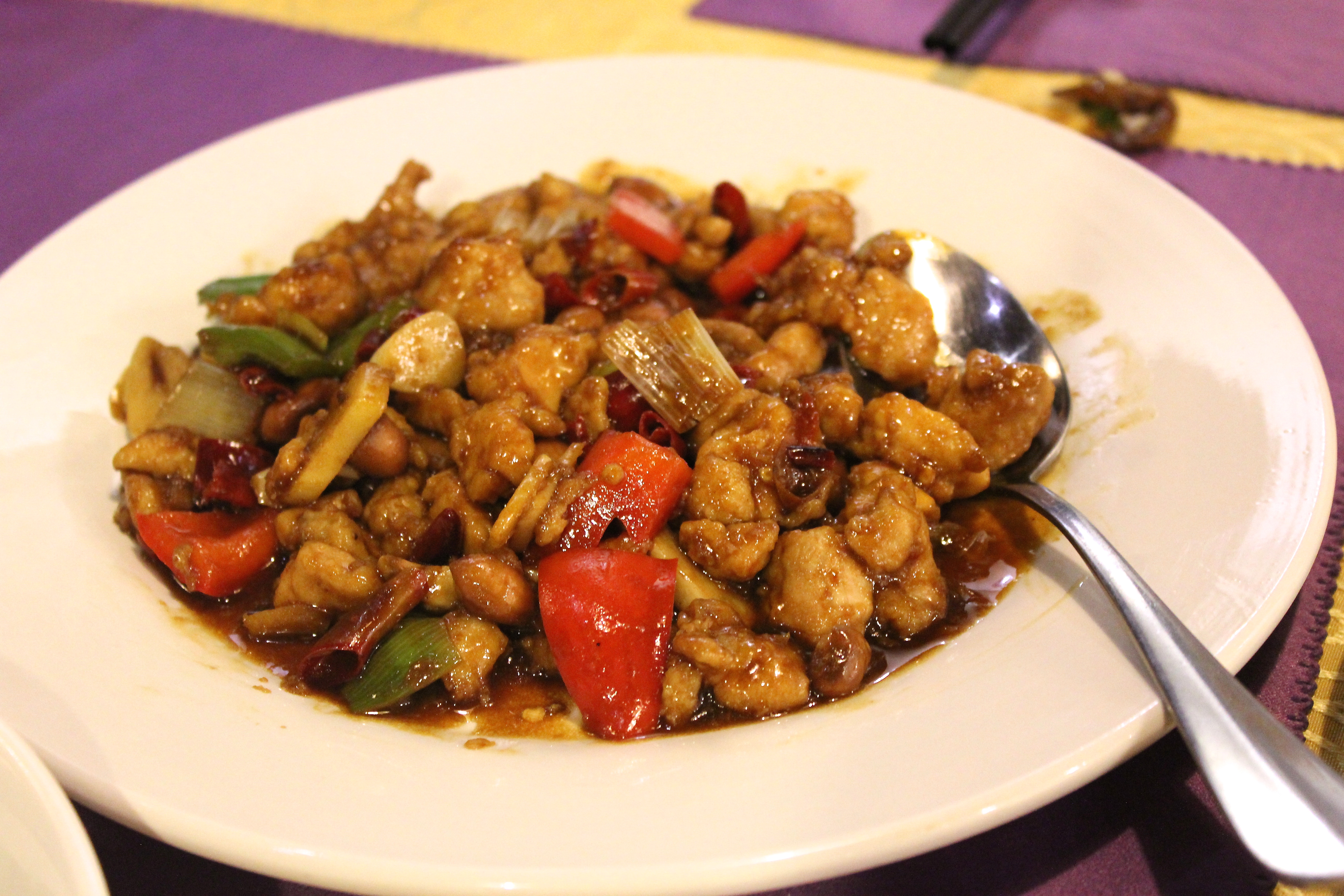 Real-deal Kung Pao Chicken at Black Sesame Kitchen. Whatever you do, don’t ask when the General Tso’s chicken is coming out. And don’t wait for the fortune cookies either- neither is authentic in mainland Chinese cuisine. 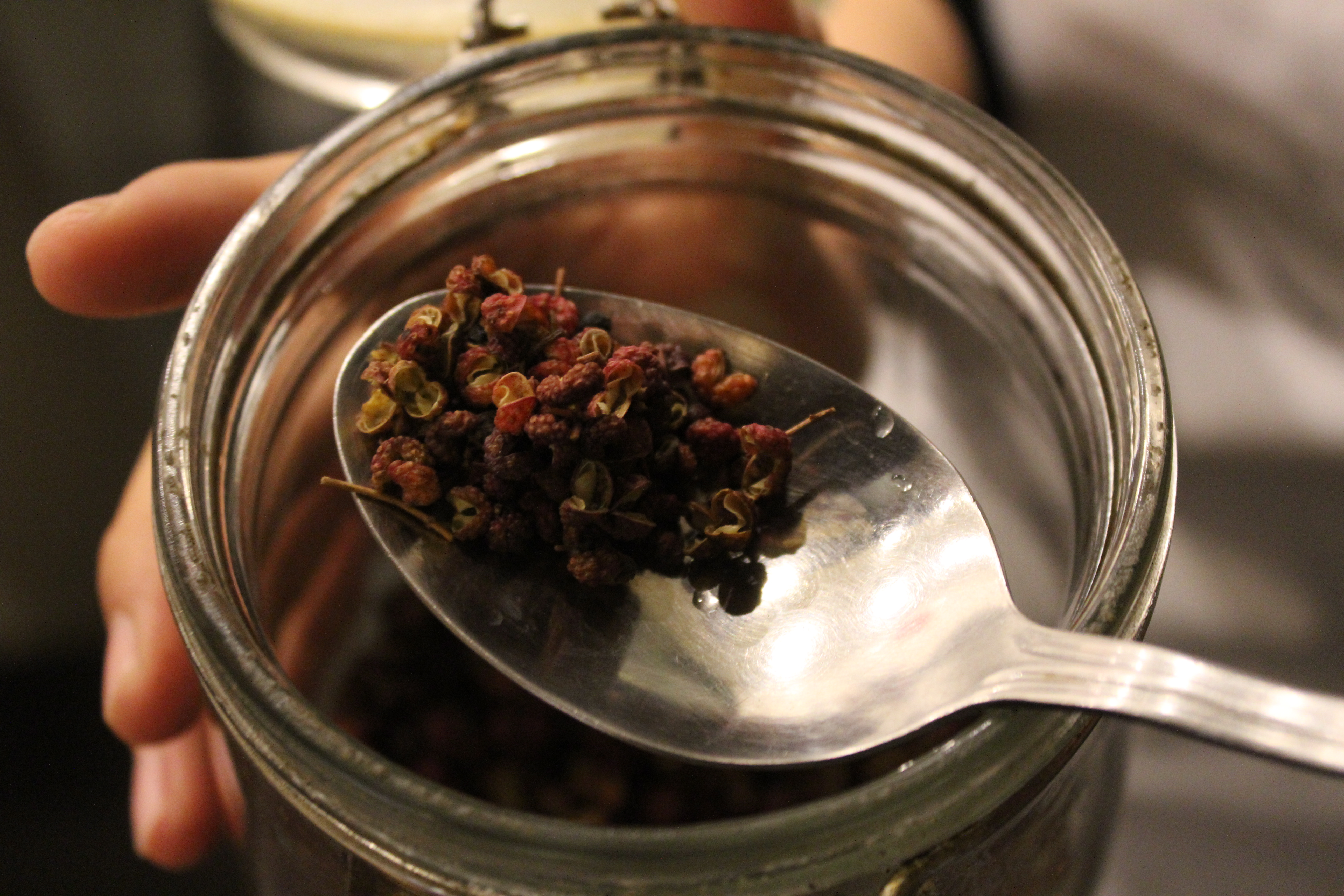 Sichuan peppercorns. I like to think of them as the Novocaine of peppercorns. Sichuan cuisine is one of the spiciest in China, and these peppercorns are chewed before meals to slightly numb the mouth before eating the really hot stuff.

Cats on the wall at Ho Lee Fook in Hong Kong. Ho Lee Fook was my favorite meal of the trip. I would describe it as hip small-plate restaurant meets Chinese food meets speakeasy, if that makes any sense. The restaurant is cozy and dimly lit, so unfortunately the pictures I took of food were nothing short of terrifying. But, suffice it to say that any restaurant whose menu features French toast with peanut butter and condensed milk along side roasted meats is A OK with me. 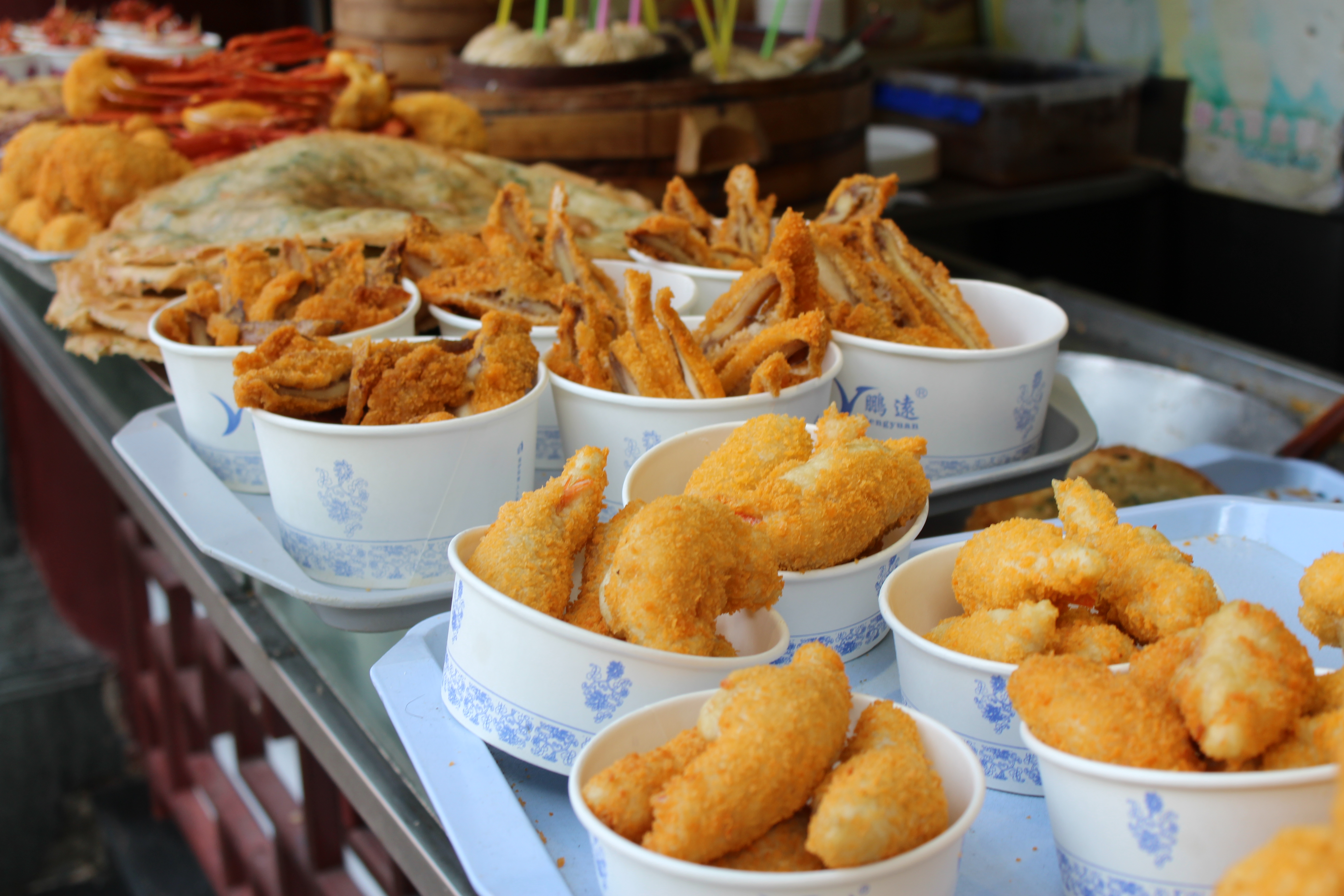 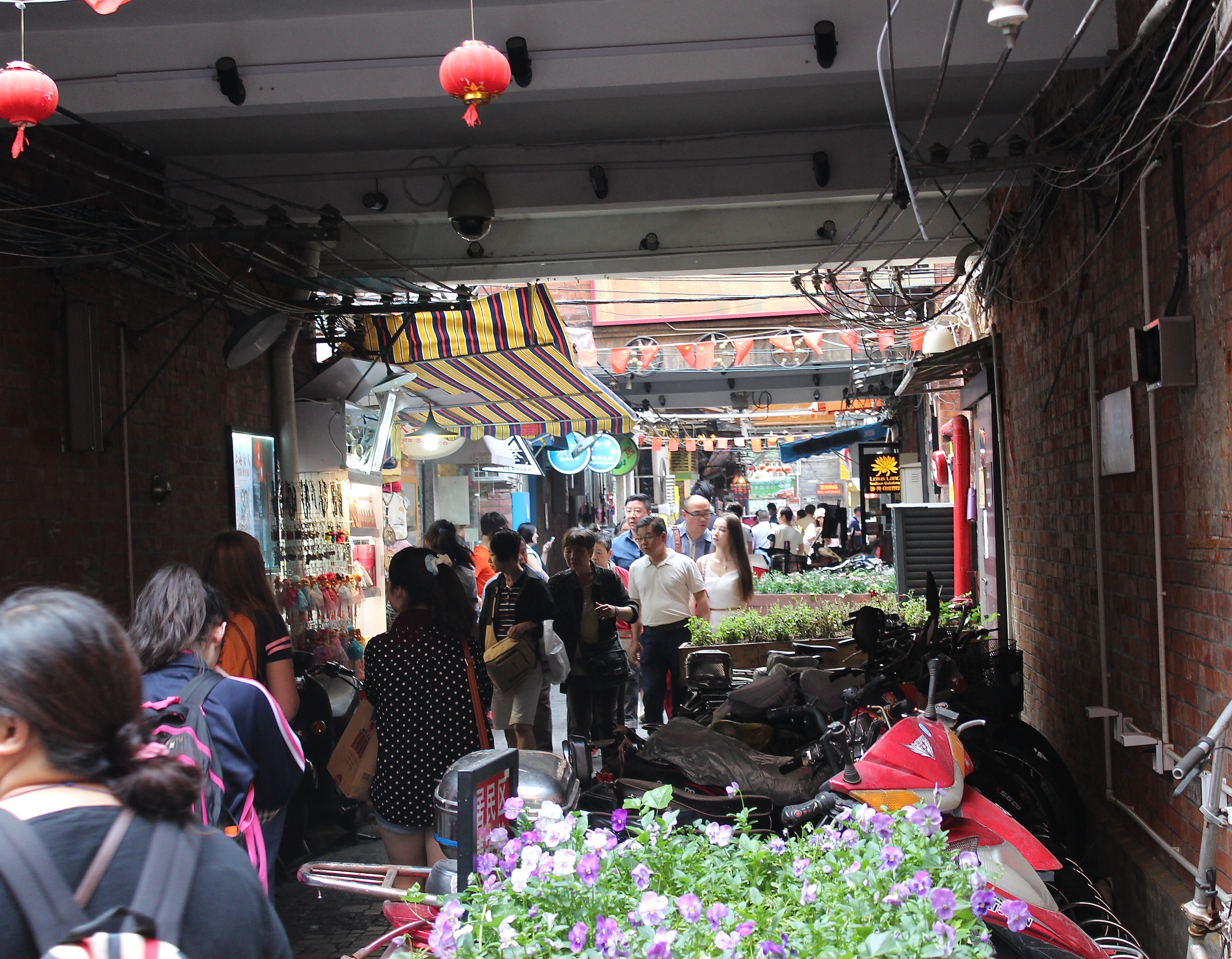 Tianzifang Market in Shanghai’s French Concession neighborhood. It’s a seemingly endless grid of narrow alleys lined with shops and cafes- the sort of place you could spend all day wandering around. A great spot to partake in some ‘unique’ Chinese confections….

Liquid Nitrogen caramel corn. This was maybe the weirdest thing we ate on the trip; I really liked it. 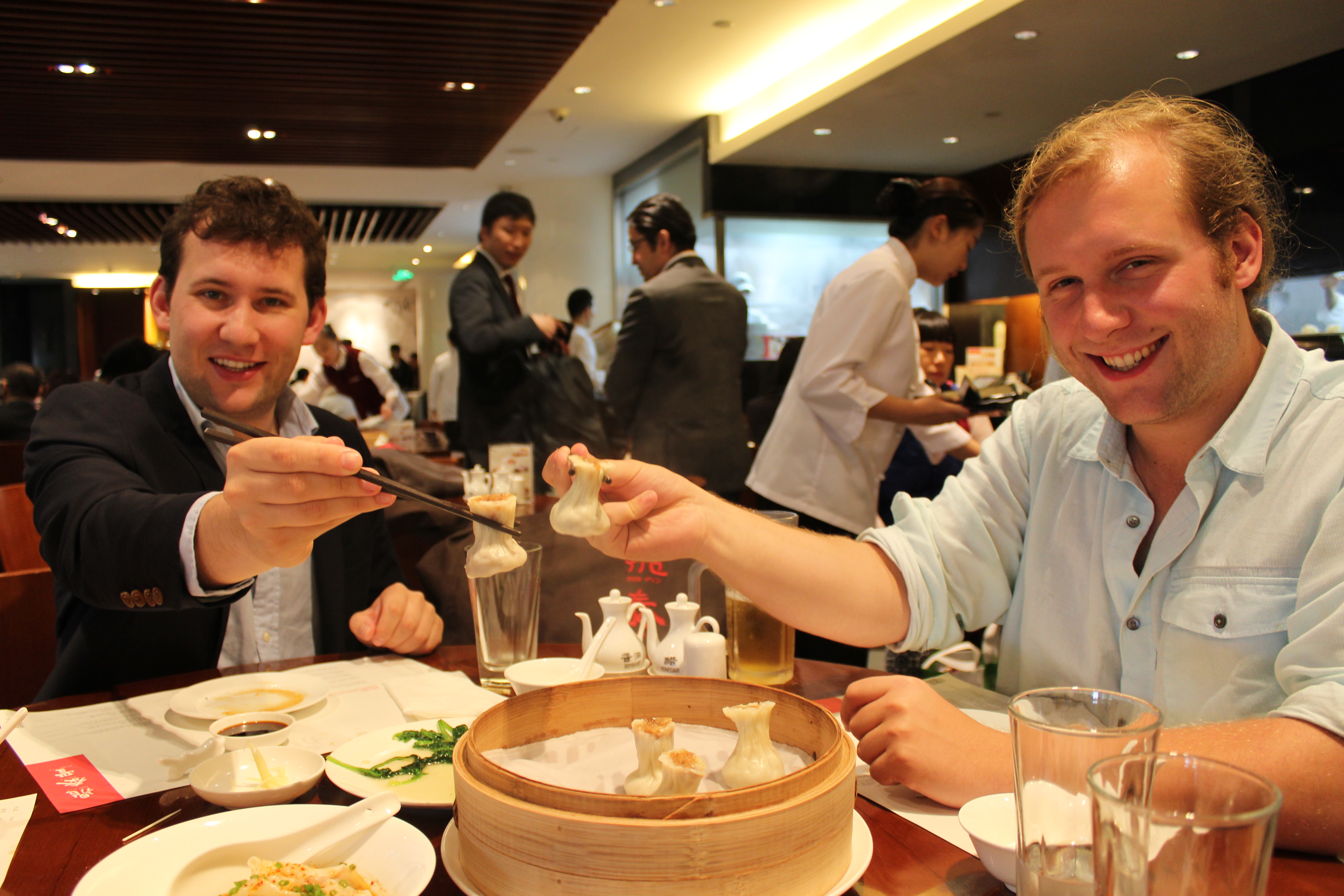 Sam and Henry at Din Tai Fung in Shanghai. People go nuts over Din Tai Fung’s dumplings (especially the soup-based ones), and there a now a bunch of locations worldwide, including in the U.S. So you don’t have to go all the way to China for dumpling heaven! 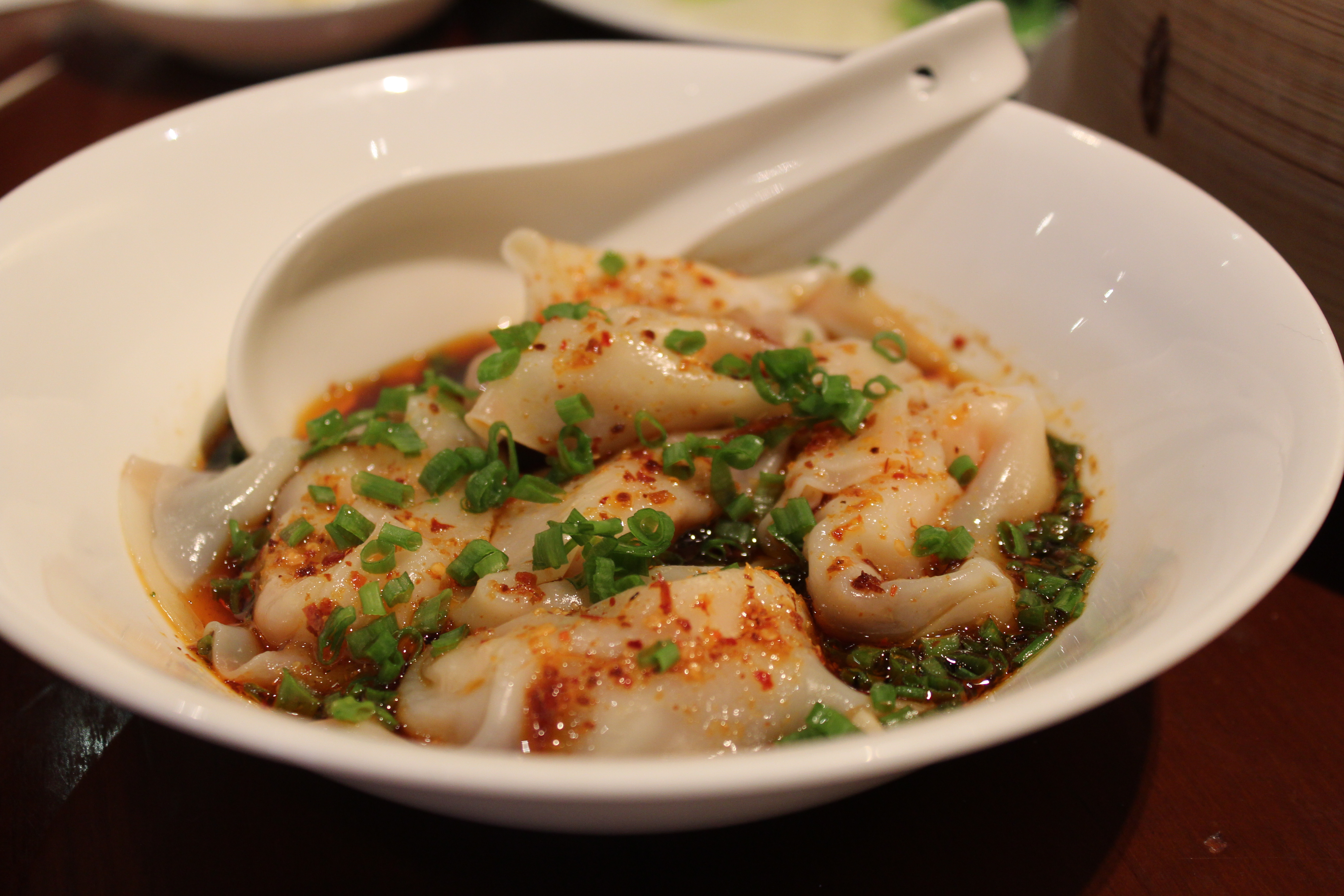 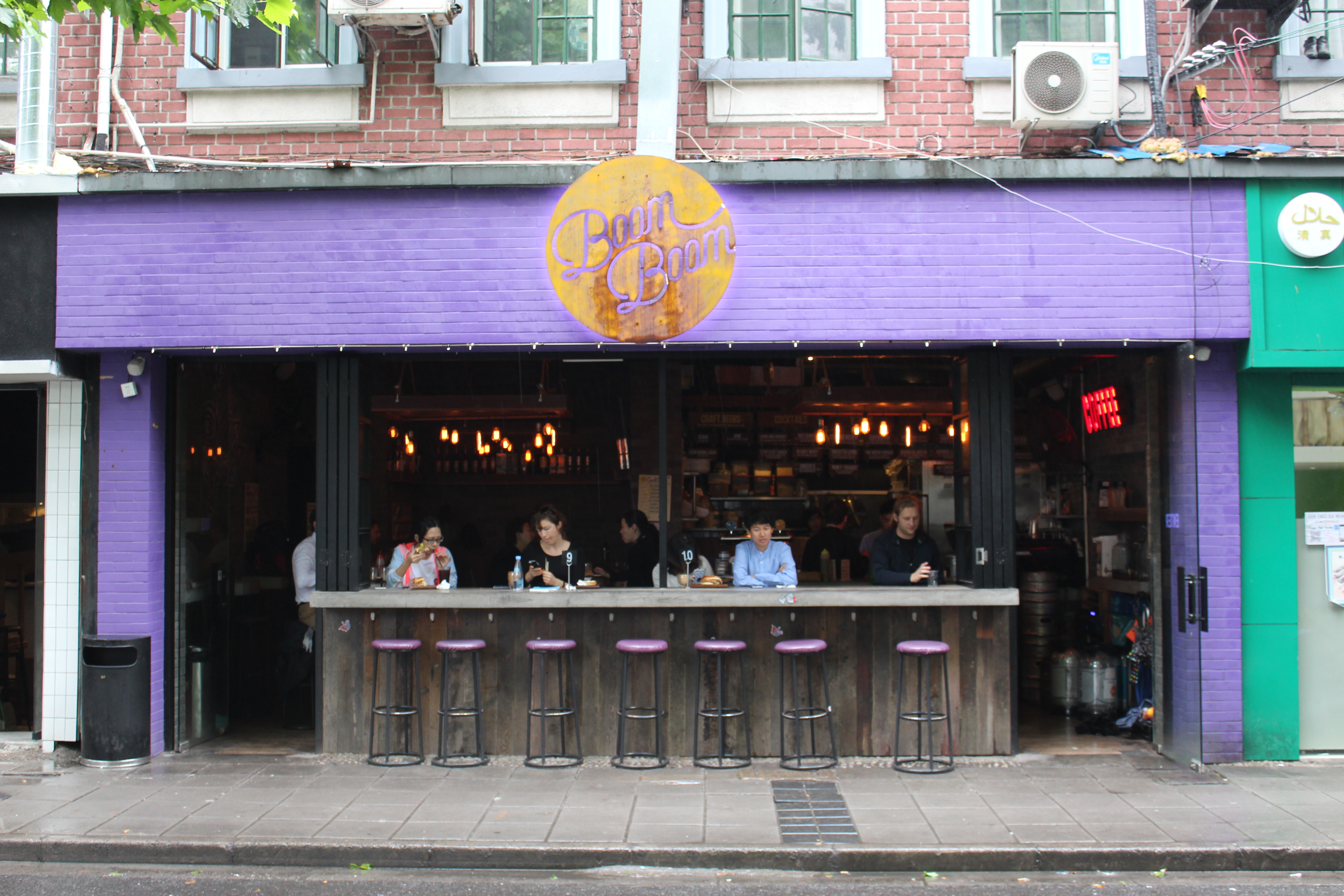 Boom Boom Bagels in Shanghai. The only bagel shop I’ve been to that turns into a bar at night. We were here during the day but rumor has it they serve open faced pizza bagels during happy hour. 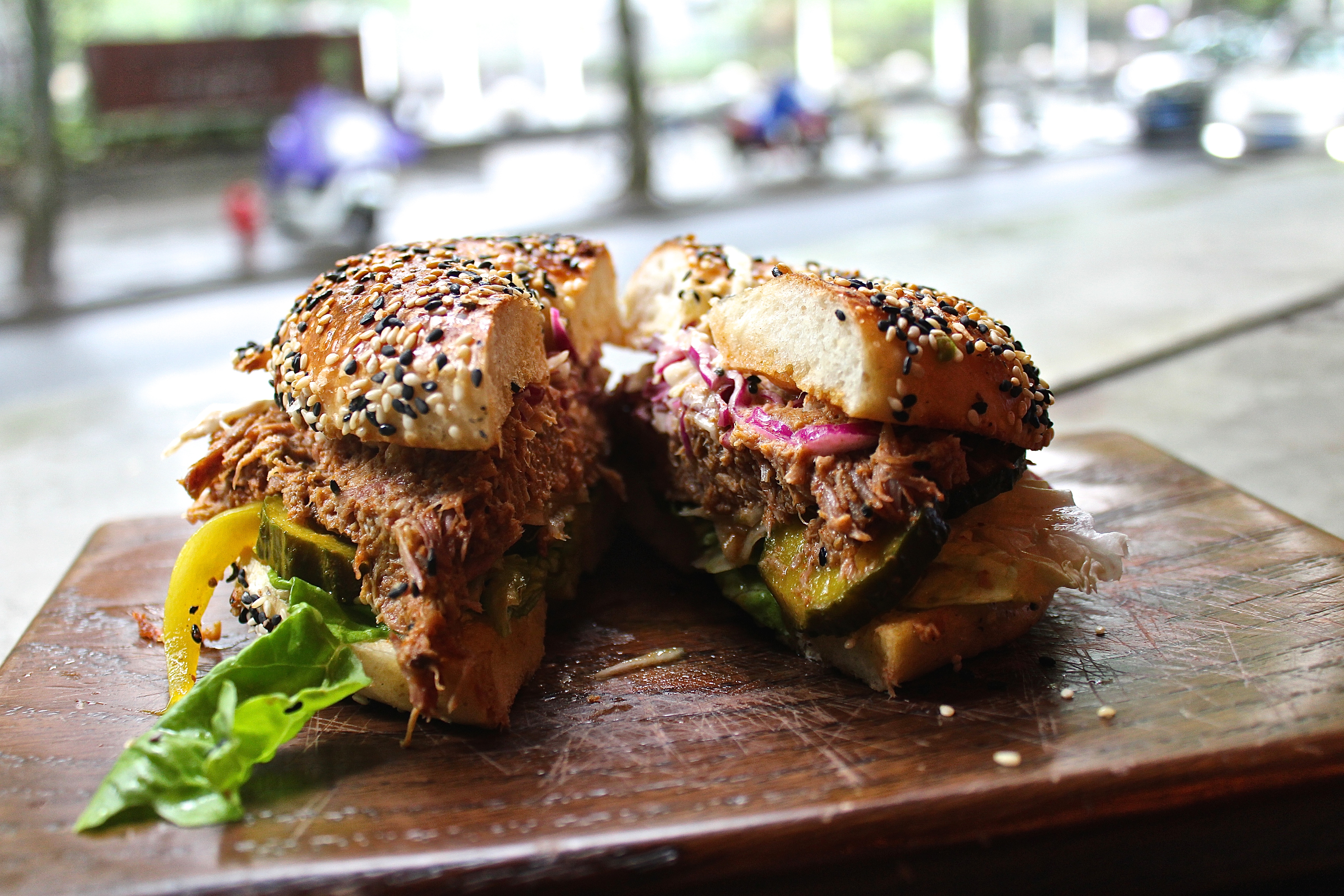 My Boom Boom bagel of choice. Pulled pork with asian slaw and pickles on an everything bagel. Not very Chinese, but very delicious. 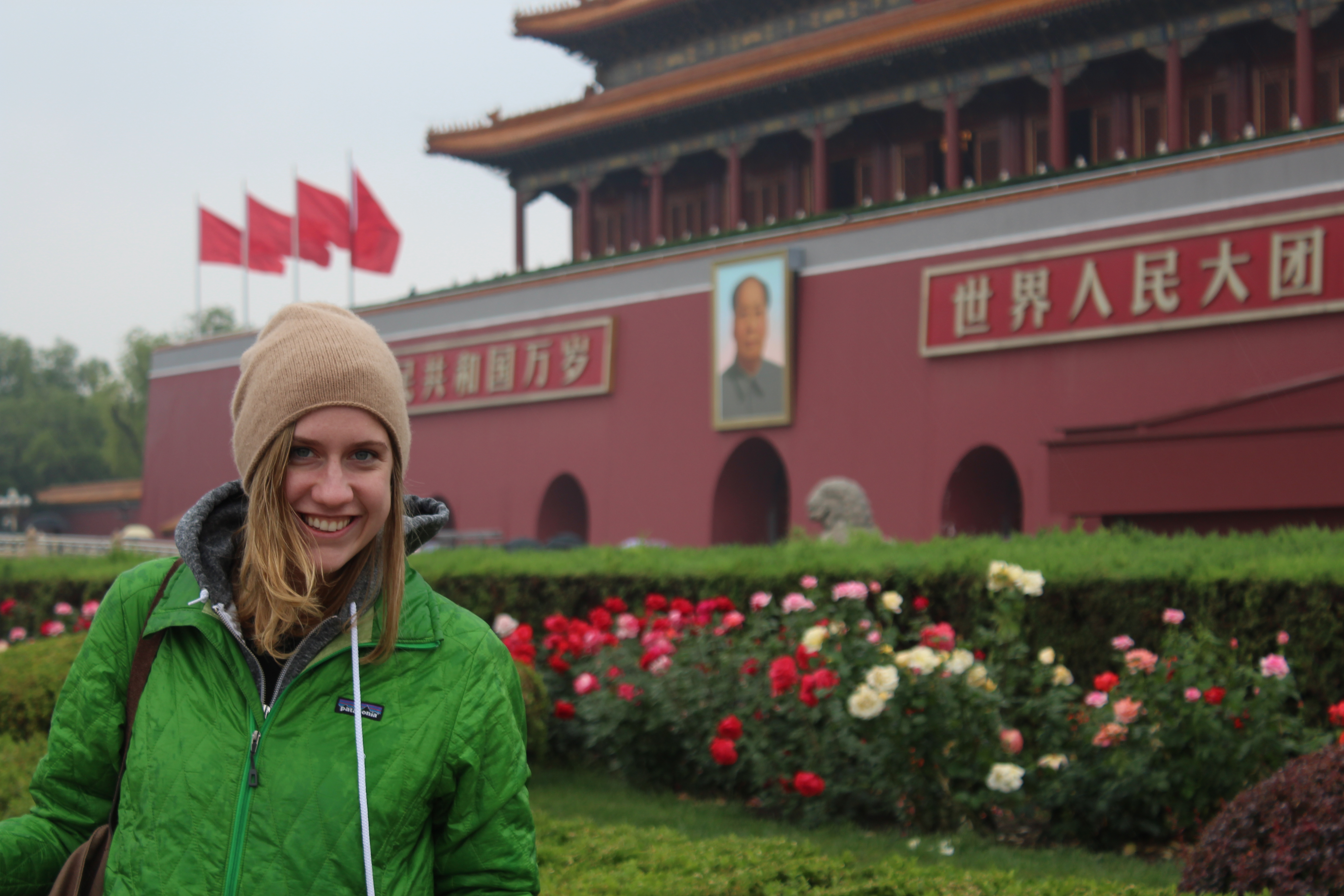 And finally, evidence that we also saw some sights while we weren’t eating! Cheesin with Chairman Mao outside the Forbidden City, Beijing.