About a month ago (but who’s counting) I did a little chia pudding tutorial on my Instagram stories, and the number of responses/requests for the recipe blew me away.  I was surprised because chia pudding is one of the easiest things to make on the planet, and I often don’t use a recipe at all.  I can’t remember when I began making chia pudding, but I realized that if you haven’t made it at home before, it probably seems like a bit of an odd thing. You put the seeds in the milk, and then what?? Well, that’s what’s so great about chia pudding – that’s pretty much it!

Chia seeds (the same ones used in good old Chia Pets!)  expand when soaked in liquid – in just two hours, they thicken into a delicious pudding – no cooking required. You can add any flavorings you want -spices, different kinds of milks, sweeteners, and of course, toppings – for a great grab-and-go breakfast or healthy treat.  The seeds themselves are an excellent source of fiber, protein and Omega-3 fatty acids, and are often included on ‘superfood’ lists.

I’m not a big meal prepper, but I do like to make a batch of chia puddings to keep in the fridge all week. It’s one of my favorite summertime breakfasts, when it’s way too hot out for my beloved oatmeal.

Today I’m sharing 3 different recipes for chia pudding. Many of the ingredients you need for all three of these versions are staples you probably already have on hand, and there’s plenty of room for substitutions based on your preferences (and what’s in the pantry.)

A note on milk: You can use virtually any milk to make chia pudding. Dairy milk, nut milk, oat milk – whatever you’ve got will work as long as you follow the proportions in the recipe. Because I make chia pudding as a healthy breakfast or treat, I tend to stick to low-fat dairy milk or an ‘alternative’ milk like almond or oat. (If you’re using a non-dairy milk- make sure to go for a plain, unsweetened variety so the milk doesn’t compete with the flavors in the pudding.)

Up first is Maple Vanilla Chia Pudding. This is the most basic recipe and the one I make the most often. It’s a great base for a variety of toppings – fresh fruit, jams, chopped nuts, seeds, granola- the list goes on. It also requires the fewest ingredients – meaning if you’ve got milk and chia seeds, you’re halfway there. If you prefer, you could use honey or agave to sweeten this pudding.

The second recipe is for Peanut Butter Banana Chia Pudding. I call this one the “crowd pleaser.”  The PB and banana combo is a classic, and the creamy texture of both mashed banana and peanut butter works really in chia pudding.  I also love this pudding because it’s ready to go- no toppings necessary. (Though a big spoonful of raspberry or strawberry jam doesn’t hurt.) Almond butter would also work well here.

Last but not least we’ve got Chocolate Coconut Chia Pudding. While the first two recipes are ones I make for breakfast, this chia pudding falls more firmly into the dessert category. Made with canned coconut milk and cocoa powder, it’s a little bit richer than the first two, and I make it with fewer chia seeds, which gives the pudding a consistency that’s not unlike traditional chocolate pudding.  (I made this one for a friend who can’t eat dairy and she said she it was ‘just like SnackPack, but better!) I’ll take it.

Also, because this is one is meant to be a treat or dessert, it makes a little bit less than the other two chia puddings.

And that’s it!! Let me know in the comments which version you tried, and what toppings you used – the toppings are always my favorite part!!

(As an Amazon Associate I earn from qualifying purchases. BUT, please know I only ever link to products I use and love!) 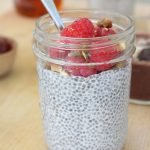 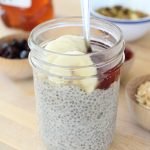 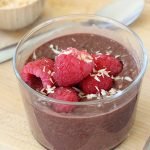